The sHebabS name for Portage is StE’xygw1L “where one pushes the canoe over.” Stories were passed down from the Native sHebabS people of a battle at Portage between raiding Northern tribes and Southern Puget Sound tribes. The Northerner tribes were known to raid lower Puget Sound tribes to capture slaves. Aware of an oncoming raid, the Southern Sound tribes teamed up and attacked the raiders at Portage, throwing rocks in the invading canoes. The fight was a crushing defeat of the Northern tribes.

Lucy Gerand, in the above photo on the Quartermaster Dock, was a member of  S’Homamish, who lived her life on Quartermaster Harbor, she witnessed her tribe hunting ducks with a large net on a hazel hoop stretched across the portage and hung from a tree,  when ducks and geese inside Quartermaster Harbor were startled into flight across Portage by hunters in canoes the nets captured the birds. The tree and hazel hoop were still in the tree as of 1917. 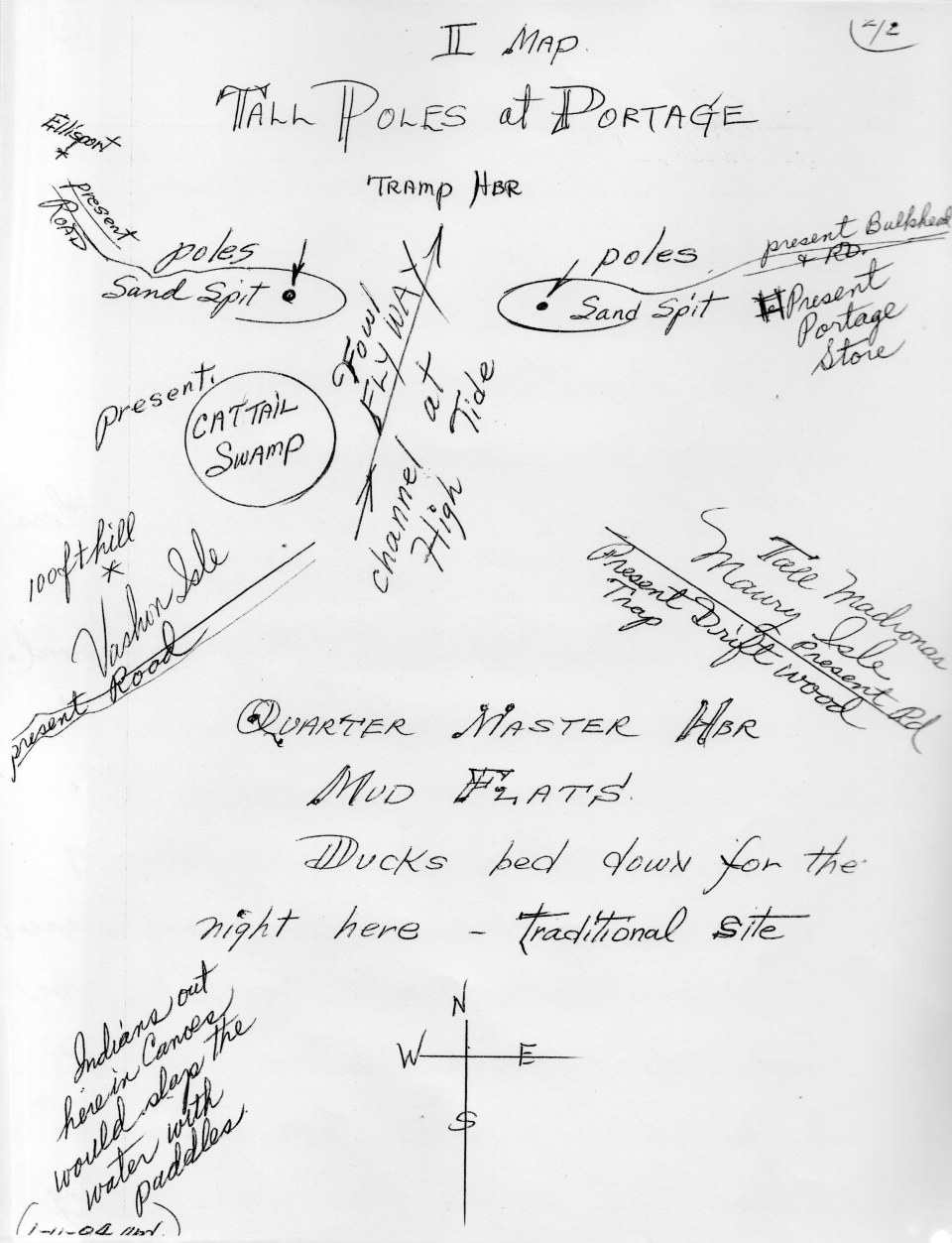 Crew member Joseph Sandford (of whom Vashon Island Sandford Point is named) wrote of the portage in his journal:

Boats out surveying South side of Vashon’s Island, at 1 the brig got underway and ran round to the East point of Vashon’s Island and it’s in a deep bight which we named “Portage Inlet.” We found Vancouver to be in error as to the formation and depth of a bay which penetrates the SSE part of the Island. Its head is separated from “Portage” Inlet by a very narrow isthmus of white sand which one of our boats that had been surveying the harbors was dragged. 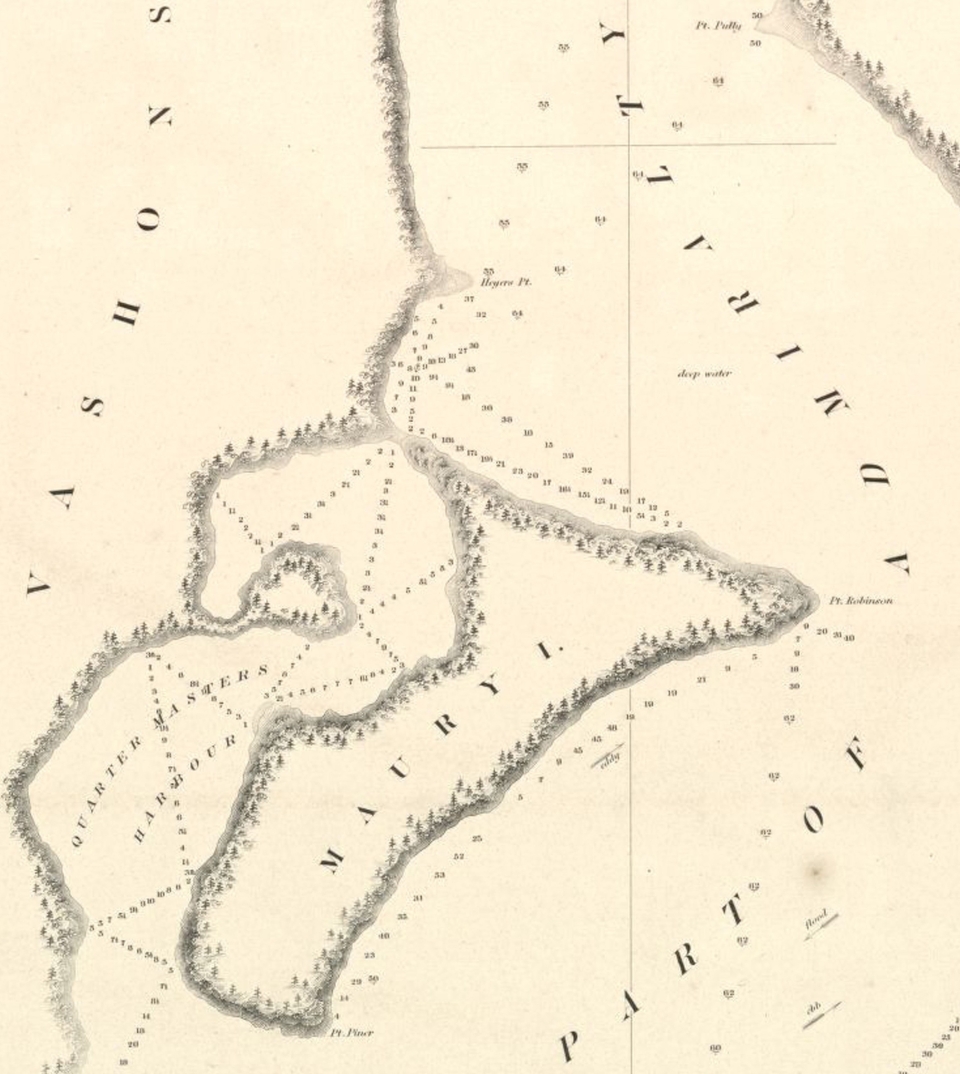 Bill Rendall, whose family homesteaded on Maury Island when he was a child wrote a memoir and recalled what he called “the portage” in the late 1880’s:

The writer has vivid recollection of the portage and the water passage in existence there until late in the eighties. One late afternoon, in the year 1887, when the writer, then a small boy, had been visiting with the other children at Quartermaster, he started for home following the beach around to the M.F. Hatch place, as there was at that time no roads between Quartermaster and Maury, it was probably half an hour before high tide, but when he came to the portage the water was about two feet deep in the channel…The writer hesitated some time, but finally waded across, with the water up to his waist. Earlier in the same day, the writer accompanied Mr. Griswold and his three boys to the east side of the portage to get a skiff that they had floated across the portage a day or two previously, but needed immediately. They used a horse and a low sled with wide flat runners, called in those days a go-devil, to haul the boat across the portage…Portage was at one time a hunters paradise, the writer can even remember when the water of Quarter-master Harbor was literally covered with ducks and geese.

Helen Put described Portage when her family arrived in 1904

In the early days a bridge started just past the Portage store connected Maury with Vashon. When the tide was out there was one island, when it was in there were two distinct islands.

Portage was also a sacred burial spot, burial canoes were found by settlers in the area to the south of the Portage store, which at that time was a Madonna grove.

My father helped with the excavating and in the process of digging many human skeleton were unearthed. It was supposed that the indians had a battle at that point and that the bodies were buried halter skelter.

Prior to the time of a road to Portage, the low land was always filled with natural debris and the word portage means a barrier between two bodies of water. As early as 1908, a serious effort was made toward buildiing a ships canal at Portage. It was suggested in 1911 the an improvement district could be created including both islands, asess every piece of property and thereby cost very little per acre. The estimated cost was $27,000 for the Portage canal.

The below King County Road map circa 1900 shows a bridge extending north from the Portage Wharf. Notice Rd 487 (current day Quartermaster Drive) as it turns north at the foot of the hill on the Vashon side then meets up with the bridge and road coming from the Maury side. The area in the middle of that triangle (current day swampy area to the northwest of the Portage store building), is where the portage filled with water at high tide. This section of road along the southern hill of Vashon was vacated by the county in 1914, county crews took down the bridge, filled in the swamp between and built a road at bulkhead level and the two islands were married together.

The question of opening a channel at Portage was discussed in a 1960 letter from Washington State’s Senator Warren G. Magnuson to Harry Nordstrom, President Vashon Island Chamber of Commerce, states,

Since receiving your letter of May 9th, I have received correspondence from residents of Burton opposing your proposal the a channel be provided from Quartermaster Harbor to Tramp Harbor.

I am very reluctant to present your resolution to the Senate Committee on Public Works unless all groups and persons on the Island are agreed on the project. I would suggest that a public meeting be held or other attempts be made by your Chamber to get thew whole Island back of your proposal. Please let me hear from you again in regard to these developments.

While there are no known photographs of an open channel at Portage, written and oral accounts show that it was not filled with water at all tides and was anywhere from 1-3 feet deep at full tide, while at lower tides there was a swampy muddy area between the two islands.