In the 1920’s Vashon town would experience a growth of buildings and businesses. In 1921 T. Hansen of Vashon State Bank and L.C. Beall’s Gorsuch Addition was certified by the county. The Gorsuch Addition added 22 business lots in central town, including eleven lots on the west side of Vashon Hwy Sw, from the current Hardware Store Restaurant to the Vashon Print & Design-Gravy building. By 1928 all the lots facing Vashon Hwy Sw had been developed but one. Beall & Hansen built several buildings and owned others they leased to businesses. 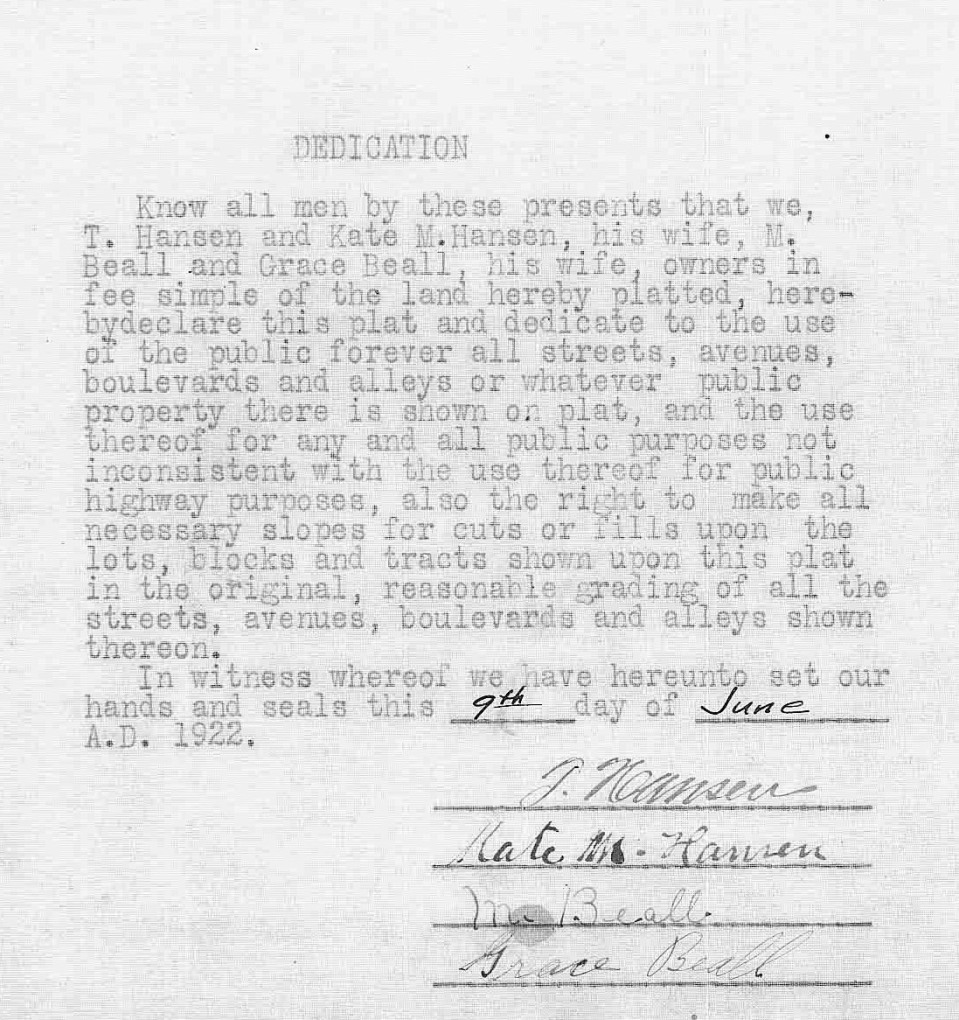 Below, Vashon-Maury Island Heritage Association, 1916 photo.  Left, Vashon State Bank, far right Weiss residence.  There were no other commercial buildings north of Bank Road at this point. Community Club building at current Ober Park can be seen at the third telephone pole on the right. .

“We are building a new home for the News-Record, just north of the residence of the editor. The building will be 20 x 50 feet, furnishing us with 900 feet of floor space. It will be electric lighted, the machinery will be propelled by electric motors, and the linotype will be heated electrically. There will be running water, an abundance of light, ample store-room, a separate office for the editorial room, all will be modern and convenient”. Vashon Island News Record, November 5, 1920. The Vashon Island News Record office was located about where Dr. Langland’s office now stands.

January 21, 1921 issue, the Vashon Island News Record reported, “Chas. F Deppman has a bevy of men at work this week putting in the foundation walls for a concrete garage and storage building located just north of the hotel”. In 1922 the News Record reported that P.A. Peterson had leased the Deppman building for his hay and feed business. No photo

E. Mace who ran a garage just south of the Pioneer Meat Market, bought the original Vashon State Bank building. In 1922 Mace removed the second floor, earlier it had been struck by lightning and damaged. He then remodeled the building into a garage.

Below, 1938 King County Tax Id photo of the building, you can see the remaining brick wall from the original building above the garage sign. 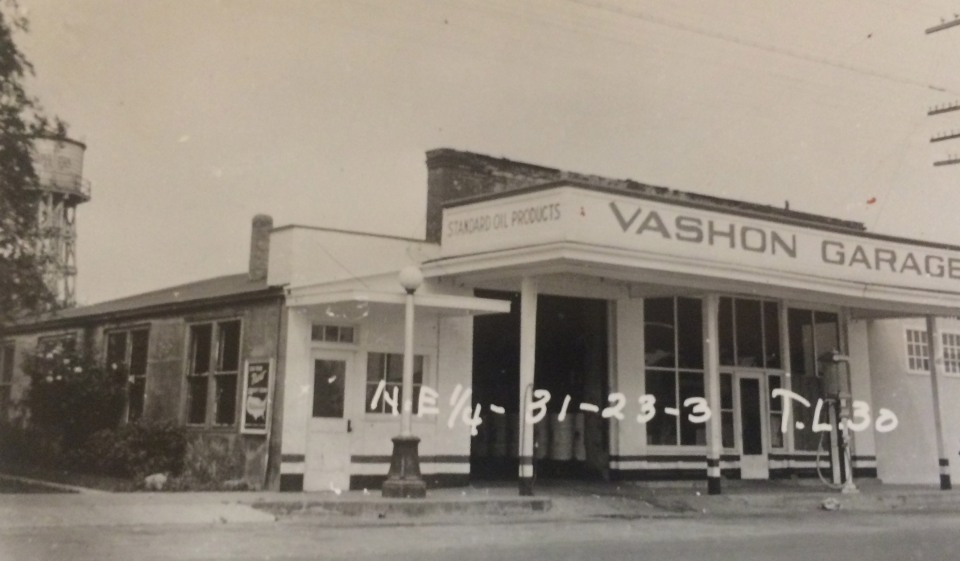 C.F. Van Olinda bought two of the 25′ Gorsuch Addition lots that fronted Vashon Hwy Sw and in 1923 built a building to house the Post Office, on the south side, and Ray Campbell’s Dewdrop Inn on the north side. The Post Office was in the building until 1954. Tim Clark took over the Dew Drop Inn space and started a Drug Store in the north half of the building, it would remain a Drug Store until 1939. 1938 King County Tax Id photo. 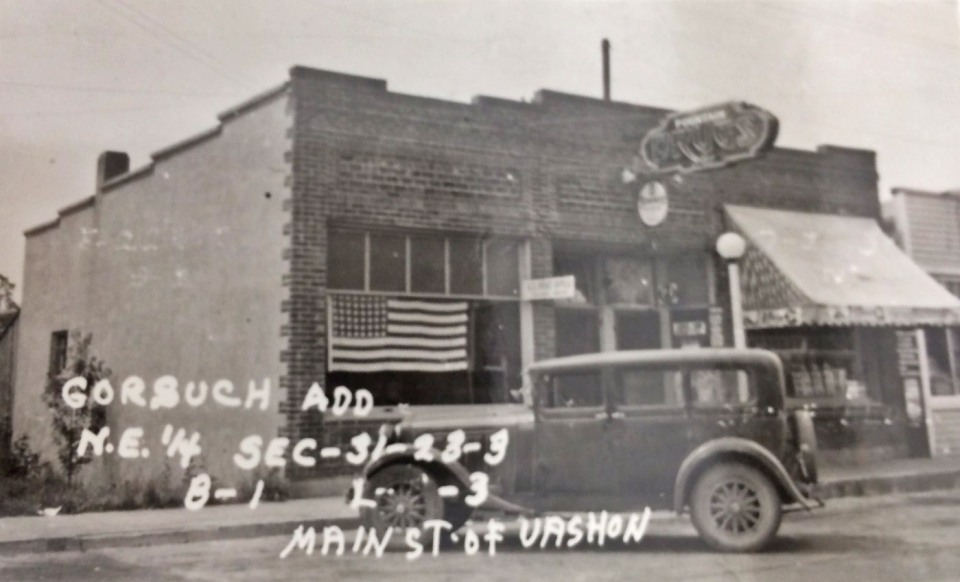 E.C. Thompson began a meat delivery service called, Daily Needs Meat and Fish in 1923. In 1925 Thompson started the Daily Needs Market in the south space of the Gorsuch Store building, formerly the Rodda Meat Market, seen on the far right in the above photo. 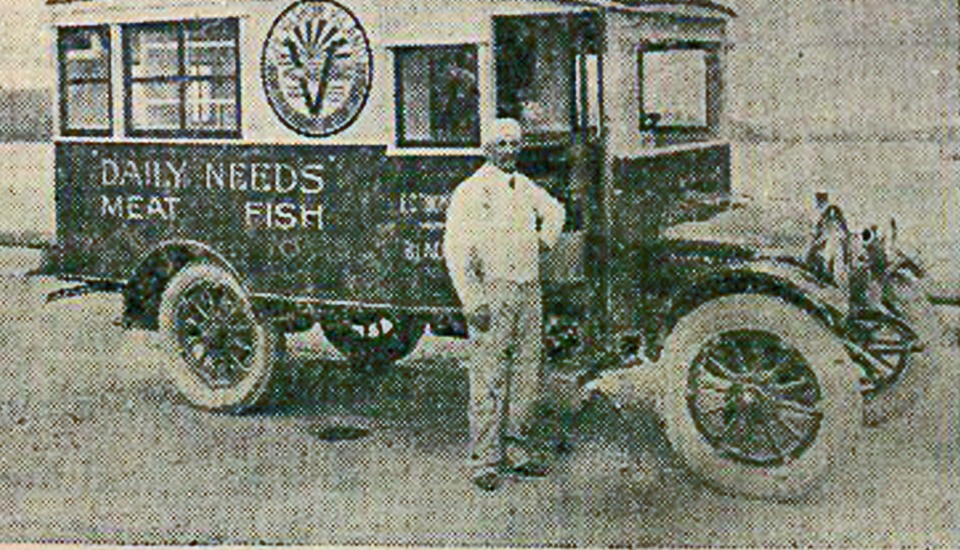 The date of the below Van Olinda photo, Digital Collections, University of Washington Library, dated 1930,  could be erroneous. The photo looks north from the town’s water tank, which stood where the Water District 19 office stands in 2016. In the foreground from left to right is Bank Road, the old Gorsuch barn and packing shed can be seen on the south side of Bank Road. The two-story home past that is the Hansen home, later moved to Cove Road. At the peak of the Hansen home the east side of Vashon Hwy Sw can be seen leading up the hill. Note there are no buildings on the east side of Vashon Hwy Sw until the Community Club building at the current site of Ober Park. A.T. Bacchus built his first lumber building south of the Community Club in 1928, not seen in this photo, so this could be an earlier photo. Dr. McMurray’s office can be seen to the left of  Vashon Hwy Sw across from the Community Club building.

In 1925 the Vashon Island News Record reported, “The water district proposed has been expanded from four 40 acre tracts to the four 160 acre tracts that corner at the bank”.

The proposed water district started a building boom in 1926.  VASHON BUILDING BOOM TO START, headlined the March 26, 1926, Vashon Island News Record. “With the coming of water a building boom will soon be seen in the town of Vashon. Mrs Hall has her plans completed for a modern laundry. Herman Deppman has bought the lot joining the P.O.building and will start a plumbing shop as soon as the spring rush is over. C.G. Kimmel, merchant and his father in law Mr. Moberg are working on plans for a modern merchandising building to cover the vacant corner north of his present store. The “Dynamite” building is nearly done and will be occupied by and electric store on one side and a beauty parlor on the other. This year will see more new business buildings begun than any year in the past record of the townsite”.

John Metzenberg and Harold Cronander moved to Vashon and started the Met Cro Garage in the old Deppman concrete building in 1925. In 1926 Deppman builds a new building between his building and the Martin Block building to the south (currently the bar area of the area Bicycle tavern). In 1933 the south wall of this new building will stop a fire and save the rest of the east side of the street ( wall on the right side by the delivery truck). 1938 King County Tax Id photo.

A new water system was installed for the town in 1926 allowing for more growth, that year Emily Hall built a Laundry on the west side of Vashon Hwy Sw, north of Bank Road, currently the Intuitive Arts building. 1938 King County Tax Id photo.

In 1927, Thomas Steffenson opened an Electric shop in the north half of the new building and a beauty shop opened in the south half. 1938 King County Tax Id photo. 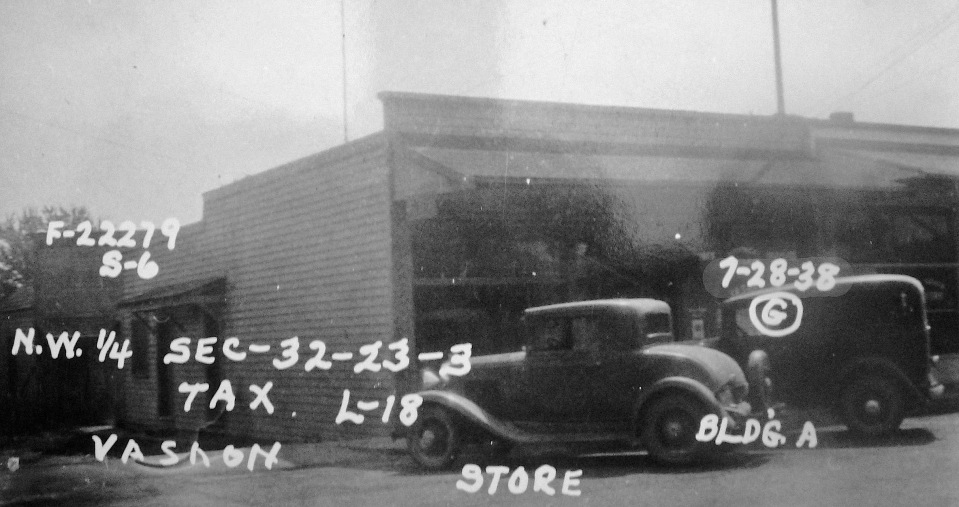 C.G Kimmel, an Island boy started in the grocery business in 1908 as a delivery boy for Sylvester Huffman’s store at the Vashon Landing, covering the territory from the Beall Greenhouse to Chautauqua by pony and buckboard. He’d also spent time as a telephone operator and held a variety of jobs at the greenhouses. He received an unexpected call. It came from Mr. Gerry who ran a general store where the Hardware Store is now. “Could you come to work Monday for $90 per month”? “Why yes of course” was the answer.
In 1921 Mr. Gerry sold the store. Then Garner moved across the street to work for his friend Axel Peterson selling groceries, dry goods and feed. In 1923 he bought half interest. Growth was so slow that their first month they din’r make enough to pay the power bill. They stayed with it, though, until 1925 when Axel sod his interest to Garner, retaining the feed and seed portion and moving to a building across the street and south, later becoming England Peterson Feed and Supply Co. Two years later Garner erected a solid brick building on the southeast corner of Vashon’s main intersection. Homespun Chronicle, The Past Remembered III.

T. Hansen and L.C. Beall built a building on Gorsuch Addition lots 5, 6, and part of 7 in 1927. The Daily Needs market moved into the Beall Hansen building, OA. Ramquist opened a tailor shop in the building and Garvin started a real estate office in the building. The building was destroyed by a 1933 fire. No photo.

England Peterson Hay and Feed Supply bought Gorsuch Addition lots and built a building in 1928 to house offices and Vashon Auto Freight, the rest of the space was used as a warehouse. The building was destroyed in a 1933 fire. Undated photo, Vashon-Maury Island Heritage Association.

The Met-Cro Garage moved from the Deppman building in 1928 to a newly constructed building on the property south of the Martin Block building. L.C. Beall had the building built and leased it to Met Cro. The building was destroyed by a 1933 fire. Below detail from a 1932 photo, Vashon-Maury Island Heritage Association.

F. Weiss was the proprietor of the Weiss Store located in the original Gorsuch Store building he took over from Gorsuch in 1913. In 1917 Weiss sold the business to Robert Gerry who in turn sold it back to Weiss in 1922. In 1928 Weiss moved his store kitty corner to his old store, on the northeast corner of Vashon Hwy Sw and Bank Road, in a new fireproof two-story brick building. The Vashon Island News Record reported. “Modern show windows and fixtures will lend an attractive appearance and enable Mr. Weiss to display his stocks of groceries, dry goods and hardware to the best advantages”. 1938 King County Tax Id photo. 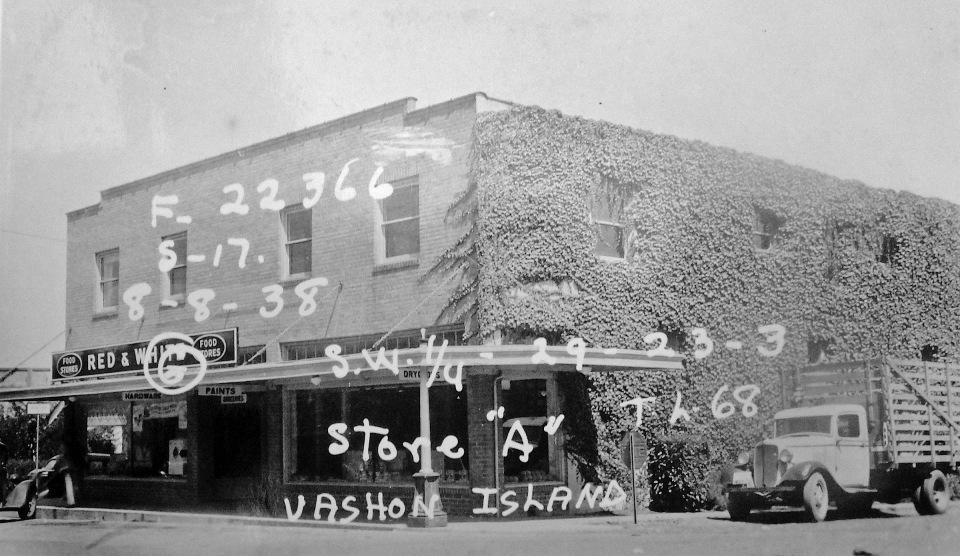 In 1928 A.T. Bacchus bought property on the east side of Vashon Hwy Sw north of Bank Road. Eventually Bacchus would own from the current Vashon Baking Co.building to the Subway property. Over the next twenty plus years he would build 5 other buildings for lease to other businesses expanding the business district north.

An ad in the April 30, 1926 Vashon Island News Record states. A.T. Bacchus states, “I have now opened up a retail lumber yard at Vashon and carry in stock practically everything you can need in these lines”.

George McCormick, an Island boy who went to the University of Washington and received a BA in geology returned to Vashon and began working in Kimmel’s Store, after a series of mining engineer jobs. In 1929 Kimmel’s Store needed more room. The Weiss Store had just moved out of the Gorsuch building so McCormick, who was the Hardware manager at Kimmel’s, moved all hardware across the street to the Gorsuch building and Vashon Hardware started. 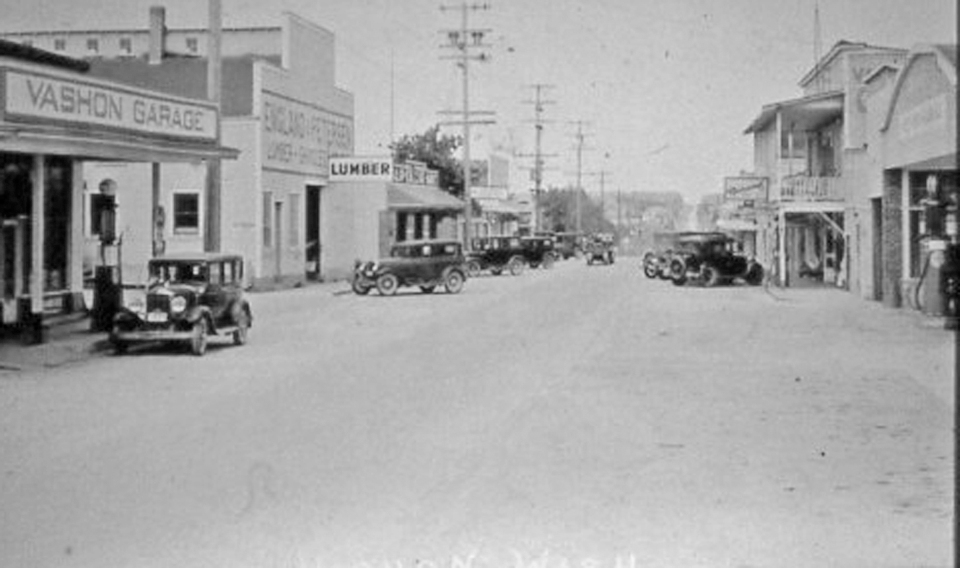 Below photo, looking north from near the Presbyterian Church. In 1933 a fire destroyed several buildings in the town core. The fire started in the Martin Block building, the empty lot behind the men standing, right. The fire spread south to the Met-Cro Garage, between brick wall ends, far right, then jumped across the street and burned several other buildings. The masonry wall, center, seen above the men standing, is currently the south wall of the Red Bicycle Tavern’s bar area, it stopped the fire from spreading north on the east side of the street. In the background is the Steffensen Store building, in 1933 it housed the Garvin Variety Store. Photo, Vashon Maury Island Heritage Museum Association Collection.

Below photo, looking north from near the Presbyterian Church, the west side of street on left. The fire spread to the west side of the street and burned the England Peterson building, current location of Pharmacy parking, and the Beall Hansen building, current location of Vashon Pharmacy. The Van Olinda building, white wall on left built from brick  along with dynamiting of a building behind the Van Olinda building helped stop the fire from spreading to the Hardware Store building. Photo, Vashon Maury Island Heritage Association. 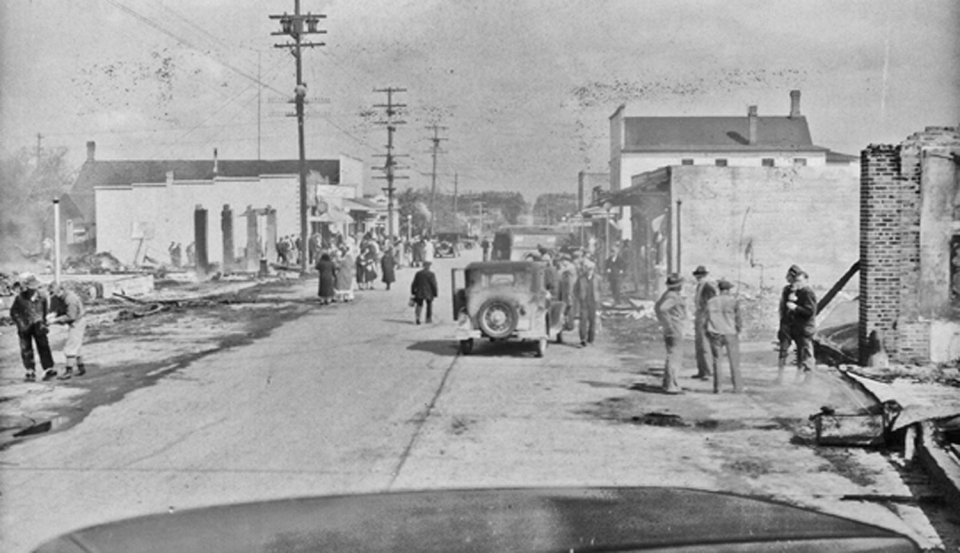